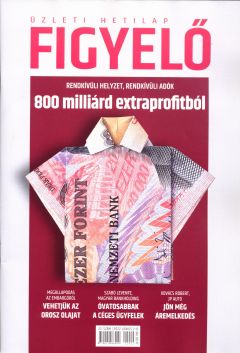 Established in 1957, Figyelő quickly became the magazine of the financial elite. Its several decade-long past makes Figyelő one of the most influential and trend-setting magazines in Hungary. Figyelő is an independent weekly financial paper, with subjects which focus on the economy, as well as business and society. Permanent subjects include management articles, the presentation of successful businessmen, the breakdown of the financial and capital markets, and the exposure of economic policy issues. At the same time, the magazine also regularly deals with scientific and technical innovations and discoveries. The purpose of the conferences hosted by Figyelő is to promote the shared deliberation of business decision-makers and heads of economy in the subject at hand. Through its conferences, as well as the series of TOP200 events, Figyelő has deservedly earned the reputation in the field of Hungarian financial journalism.