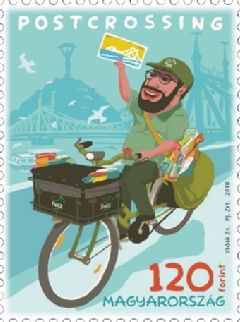 Magyar Posta welcomes the Postcrossing community by issuing a commemorative stamp. 240,000 copies of the stamp have been produced by Pénzjegynyomda Zrt. based on artwork created by the graphic artist Zsolt Vidák. The new issue will be available from 2 February 2018 at first day post offices and Filaposta, or may also be ordered from Magyar Posta’s online store. When Paulo Magalhães, a Portuguese student with a passion for mail and postcards, started Postcrossing as a side project on 14 July 2005, he had no idea that he had established a new worldwide community. Its success was driven by the simple idea that everyone likes receiving wonderful postcards from distant countries. The Postcrossing project is an online platform (www.postcrossing.com) with a goal of connecting the different parts of the world with real postcards, allowing anyone to send and receive postcards from all over the world. To join Postcrossing, all you need to do is to sign up for a free account. One unique feature of Postcrossing is that all exchanges of postcards are random: the sender does not know in advance where and to whom they are going to send a postcard, since the addressee is randomly chosen by Postcrossing. Likewise, the recipient does not know where or who the postcard is coming from until it lands in the postbox – and so all postcard exchanges are a surprise! The random nature of the project means that it connects people from all corners of the world and of different ages, genders, nationalities and beliefs, thus celebrating the world’s diversity. This is no mere phrase, because there are countless reports of new friendships made, new languages learned and numerous cultural values discovered. Today, 45 million postcards have been received through Postcrossing among a community of more than 700,000 members worldwide. This successful community brings many people together by putting them in touch with each other and makes the world a happier place — one postcard at a time. Source: www.postcrossing.com