Károly Simonyi was born 100 years ago 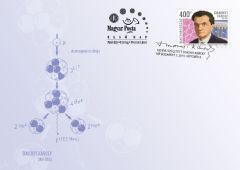 Magyar Posta is issuing a commemorative stamp in honour of the centenary of the birth of the engineer, physicist and remarkable scholar and educator Károly Simonyi. The stamp design features a stylised portrait of Károly Simonyi set against the background of a graphical composition referring to his life’s work, including the first Hungarian nuclear particle accelerator, which was built by him. The new issue was designed by the graphic artist Zsolt Vidák and produced by the printing company Pénzjegynyomda. It will be available while stocks last at first day post offices and Filaposta in Hungary from 5 October, but may also be purchased from Magyar Posta’s online store. Károly Simonyi was born on 18 October 1916. The village priest recognised the young boy’s exceptional talent and helped in arranging for him to live with relatives in Budapest. At the age of 10 he went to the Árpád Scientific High School, where his affinity for mathematics and physics soon became clear. After finishing school, he obtained degrees in both law and engineering simultaneously in Pécs and Budapest respectively. In 1940 he became assistant professor at the Department of Atomic Physics at the Technical University of Budapest, which was headed by Zoltán Bay. During World War II he was held captive first by the Americans and then by the Soviets. In 1946 he took part in the lunar radar experiment led by Zoltán Bay. In 1948 he became professor of electrical engineering at the Technical University of Sopron, where he designed and built the first nuclear particle accelerator, a 1 million electron-volt Van de Graaff accelerator, for which he won the Kossuth Prize in 1952. Returning to Budapest, in 1952 he was the founder and head of the Faculty of Theoretical Electric Engineering at the Technical University and of the Atomic Physics Department of the Central Physics Research Institute. Later, Simonyi became a deputy director of the Institute. At the Institute work on building particle accelerators continued in parallel with theoretical studies for nuclear physics research. Simonyi investigated the feasibility and limits of fusion power generation. In 1956 he was elected chairman of the revolutionary committee at the Institute. After the revolution, he fell out of favour. On 31 December 1957 he voluntarily left the Institute and in the early 1970s he was forced to leave his post as head of the Faculty of Theoretical Electric Engineering at the Budapest Technical University, which he had founded, as well. He continued teaching as a subordinate professor. This allowed him to turn his attention to writing his best known book, A Cultural History of Physics, which was based on a series of lectures. He was awarded the State Prize for this in 1985. For years he served as chairman of the committee setting the questions for the University’s entrance exam. In 1993 he was elected a member of the Hungarian Academy of Sciences. In 1998 he won the Popular Scientist of the Year Award and his life’s work was declared part of Hungarian National Heritage. In 2000 he received the Golden Medal of the Hungarian Academy of Sciences. In the 1990s he retired entirely from public life. He died on 9 October 2001. (Source: simonyi.sulinet.hu; wikipedia.org)