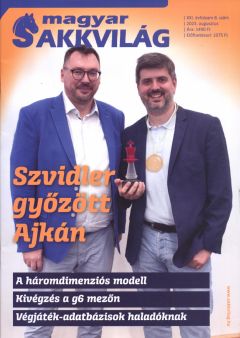 The new Magyar Sakkvilág periodical appeared in April, 2003 as the name-bearing successor of the publication edited by László Tóth, amongst others. Ever since its initial release, the publication has been at the newsagents on the 15th of every month and we hope to keep it that way for a long time to come. This is due to the efforts of our in-house and external colleagues as well as the precise work of the printing presses which have helped produce the magazine (Prime Rate, Máyer nyomda, Premier Nyomda). Magyar Sakkvilág is the only domestically distributed chess journal, which regularly and reliably informs subscribers and the general public alike.