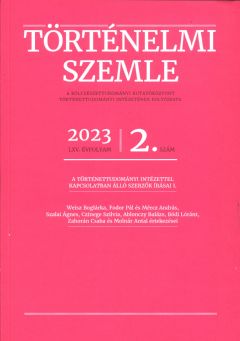 Történelmi szemle has been published since 1958 as the official bulletin of the Hungarian Academy of Sciences, Institute of History. In reality, it has also functioned as a general historical periodical since its foundation in the field of historical science and as such, is one of the mostly highly distinguished domestic periodicals of its nature, since the institution backing it up is the central institute of domestic historical science. The Szemle publishes scientifically written studies on the history of the middle ages up to the current period, as well as book reviews and argumentative articles without any thematic limitations. Its authors include the representatives of various historical science institutions, as well as regularly published Hungarian translations of the works of foreign historians and the lectures of foreign guest presenters invited to the Institute of History.