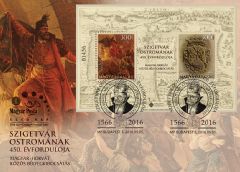 Hungary and Croatia are commemorating the 450th anniversary of the Siege of Szigetvár by issuing a joint stamp. The block containing two stamps is the work of Attila Elekes, fifty thousand copies of which were produced by ANY Security Printing Company. The new issue will be available while stocks last at first-day post offices and Filaposta in Hungary from 5 September, but may also be purchased from Magyar Posta’s online store. A depiction of Szigetvár from the period serves as the background of the block, while one of the stamps shows a detail of Bertalan Székely’s painting Charge from the Fortress of Szigetvár and the other the arms of the town of Szigetvár. The first day cover features a detail of the same painting by Bertalan Székely. On 1 May 1566 Suleiman the Magnificent left Istanbul leading his troops on his seventh campaign to Hungary. The army of more than 100,000 men advanced to lay siege to the strategic key to South Transdanubia, the fortress of Szigetvár, which standing on separate islands was considered modern at the time. The fortress was defended by a force of some 2,300 stalwart Croatian and Hungarian soldiers commanded by Miklós Zrínyi. He was descended from the Šubič people, one of the Croatian clans, and, as the Ban of Croatia, endeavoured to contain Ottoman attacks on the country and his own estates between 1542 and 1557. The siege began on 6 August 1566 and it took the Sultan’s army 13 days to capture the old and new towns, and to drain the defensive lake around the fortress. By this time the 800 surviving defenders had withdrawn to the inner castle. Suleiman made threats and promises including the Croatian crown to try and force Zrínyi to surrender on several occasions, but the commander of Szigetvár refused to open the castle’s gates despite being hopelessly outnumbered and Vienna’s indifference. On 7 September the Sultan died and the news of this was withheld from the besiegers, but a destructive fire in the fortress already reduced to rubble sealed the fate of the defenders. In the morning of 8 September the Ottomans deployed their forces in front of the gates but Zrínyi did not wait for another assault and stormed forth with his remaining troops. Zrínyi’s self-sacrifice even without killing the Sultan was very important because Szigetvár’s resistance saved Vienna from another siege. The enormity of the commander’s feat was recognised by his contemporaries and politicians in later centuries, Richelieu, the French cardinal and chief minister, remarking that in the summer of 1566 Miklós Zrínyi and the defenders of Szigetvár had saved the whole of European civilisation from destruction. The memory of the heroic military commander, one of the greatest soldiers in Hungarian and Croatian history, is honoured by both nations, and his self-sacrifice has inspired works of literature, music and the fine arts in the two countries. Sources: A magyarok krónikája [Chronicle of the Hungarians], Budapest 1995; Zrínyi Miklós - A szigetvári hős [Miklós Zrínyi - The Hero of Szigetvár] (Supplement of Múlt-kor history magazine 2016); www.rubicon.hu (Tarján M. Tamás: 1566. augusztus 6. - Szulejmán ostrom alá veszi Szigetvárt) [6 August 1566 – Suleiman Lays Siege to Szigetvár]