60TH Anniversary of the 1956 Hungarian Revolution and Freedom Fight 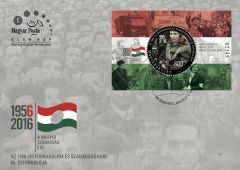 Magyar Posta commemorates the 60th anniversary of the 1956 Hungarian Revolution and Freedom Fight by issuing a special stamp block. An interesting circumstance related to the stamp block is that its colour scheme and the circular perforated stamp image in the middle recalls the well-known symbol of the 1956 Hungarian Revolution and Freedom Fight – the flag with a hole. The stamp image of the block shows one of the heroes – and at the same time a victim – of the events of 1956, Erika Kornélia Szeles (1941-1956), while the frame image presents a montage of photos taken of the events of the Revolution and of the known and unknown, deceased or still living heroes. 90,000 copies of the new issue have been printed by ANY Biztonsági Nyomda based on the designs made by graphic artist Attila Elekes. The stamp will be available at first-day post offices and Filaposta from 21 October, but can also be ordered from Magyar Posta’s online shop. The year 2016 was declared by the Government as the memorial year of the 1956 Hungarian Revolution and Freedom Fight. To mark the occasion, Magyar Posta announced a stamp graphics tender in which the sketch design of the stamp block to be used was selected by public voting. As a result of the hostile reaction of the Communist Party leadership and the bloody salvo fired at the unarmed crowd, the mass demonstration held in Budapest on 23 October grew into an armed uprising on the same night. This led to the fall of the government, the withdrawal of the Soviet troops, the restoration of the multi-party system, and the democratic transformation of the country began. In early November, the new government started negotiations with the Soviet Union about a complete withdrawal of its troops, the withdrawal from the Warsaw Pact and about the country's neutrality. However, after the initial willingness, the Soviet political leadership changed its mind and on 4 November, without a declaration of war, it launched a war against Hungary. Facing a disproportionate overpower, the heroic revolution fought for several days by the country that was left alone finally fell on 11 November. The 1956 Revolution, Freedom Fight and War of National Liberation lasted only two weeks, still it shook the world. It cracked the European peace system established after the Second World War and unveiled the harsh reality of the Soviet-style system of terror. In the decades following the suppression of the Revolution, the one-party state power called the 1956 events a counter-revolution and condemned those, but during the regime change the official assessment of the events changed. Since 1989, 23 October has been a national holiday. The identified heroes visible on the frame image of the stamp block are: Mária Wittner (1937-), patron of the Memorial Year, Katalin Havrila Béláné Sticker (1932-1959), Dénes Dóczi (1932-1958) and József Vass (1937-?). Source: 1956.mti.hu; hu.wikipedia.org; magyarforradalom1956.hu; rubicon.hu; terrorhaza.hu