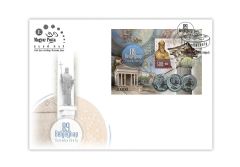 Magyar Posta is issuing a commemorative series with two denominations and a stamp block with a surcharge to mark the largest festival of stamp collectors, Stamp Day, which this year is being held in Szombathely between 6 and 8 May 2016. The new issues were produced by ANY Security Printing Company using photos by the photographers József Hajdú and Sándor Benkő, and are based on the designs of the graphic artist Barnabás Baticz. The new releases will be on sale in first day post offices and at Filaposta in Hungary from 6 May while stocks last, but may also be purchased from Magyar Posta’s online store. Magyar Posta devotes the HUF 300 surcharge on each block to supporting organised stamp collecting in Hungary. Szombathely, the county seat of Vas county, grew up on the site of the Roman town of Savaria. Before the Romans, the area was inhabited in the Neolithic, the bronze age and the late iron age. Celts lived in the area of today’s city in the late iron age. Under Roman rule the town was named Colonia Claudia Savaria during the reign of the Emperor Claudius I. It first flourished at the time of the Emperor Domitian. This was when the first large building works started. The Province of Pannonia was divided into upper and lower Pannonia while Trajan was emperor. Later, Septimius Severus was proclaimed emperor here, which favourably influenced the further development of the town. Later Constantine I attempted to halt the decline that had set in, but to no avail. The empire struggled with increasingly serious internal and external crises. The final blow to Savaria was an earthquake. From the time of the conquest of the area by the Magyars until the 13th century, the town belonged to the archbishopric of Salzburg, and later became part of Hungary as Queen Gisela’s dowry. Source: szombathelyapp.hu The main motifs of the numbered block with a face value of HUF 600 plus a HUF 300 surcharge are a herm of Saint Martin and the capital of a Roman column. In the frame around the stamp some of Szombathely’s sights and treasures are illustrated. These are the temple of Isis, the Holy Trinity statue, the heads of Roman emperors from the Emperors’ Stone, fine pieces from the Lapidarium and a fresco from the ceiling of the Bishop’s Palace. • The motifs of the HUF 115 stamp of the stamp series are the funerary stele of the Sempronius family and a Roman scene showing Constantinus Chlorus proclaiming a law in Savaria after a victory. The statue of the Holy Trinity and part of the chancel of the Cathedral feature on the HUF 145 stamp. • The main motif of the cover for the block is the statue of Saint Stephen and that of the series is a detail of the fountain in the city’s main square. • The special postmark employs a stylised drawing of the Emperors’ Stone.