900th anniversary of the foundation of canons regular of Premontré 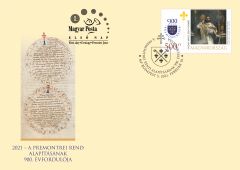 Magyar Posta is issuing a commemorative stamp to mark the 900th anniversary of the foundation of the Premonstratensian Order. Fifty thousand copies of the stamp designed by the graphic artist Imre Benedek were produced by ANY Security Printing Company. The new issue can be purchased from Filaposta, philately specialist services, certain post offices and www.posta.hu. 2021 is the commemorative year of the foundation of the Premonstratensian Order. This Catholic canonical order was founded in 1121 in Premontré near Laon in France by Saint Norbert, who in the last years of his life was archbishop of Magdeburg. The canons regular, who follow the rule of Saint Augustine, are also called the “White Canons” because of the colour of their habits. Premonstratensians built their monasteries in cities or near busy places and their contemplative way of life was connected with pastoral ministry. In the stamp design János Vaszary’s painting Saint Norbert can be seen. The original is in the baroque church built in honour of Saint John the Baptist in Zsámbék. The first day cover features a page from the Premonstratensian Tét (Csút) breviary, kept in the library of the Eötvös Loránd University.