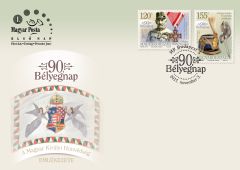 Magyar Posta is celebrating the largest domestic festival for stamp collectors, Stamp Day, which this year is being held in the Stefania Palace in Budapest between 3 and 5 November 2017, by issuing a pair of special stamps with different denominations and a souvenir sheet with a surcharge. The new issues were designed by the graphic artist Barnabás Baticz and produced by ANY Security Printing Company. The two stamps of different denominations, the souvenir sheet and the first day covers will be available at first day post offices and Filaposta in Hungary from 3 November 2017, but may also be purchased from Magyar Posta’s online store. Magyar Posta devotes the HUF 300 surcharge on each souvenir sheet to supporting organised stamp collecting in Hungary. Following the Austro-Hungarian Compromise of 1867, Act XLL of 1868 provided for the establishment of the Hungarian Royal Defence Forces, which were first comprised of infantry and cavalry and from 1913 artillery as well. The first commander-in-chief was the cavalry general Archduke Joseph Karl (1833-1905), who was awarded the Military Merit Cross with War Decoration for his achievements in the 1866 Austro-Prussian War, and from 1898 could wear a special version mounted with gems. This valuable medal and its wearer are depicted on the HUF 120 stamp. Two historic objects inextricably linked with the cavalry are shown on the HUF 155 stamp. The Hungarian Royal Defence Forces adopted the 1869 M shako, a type of military cap used by the joint Austro-Hungarian Army. The Hungarian shako (the one shown is from 1890) had a badge with arms, a white horse-hair hackle, and gold braid and trimmings interwoven with deep red to distinguish them from the joint army’s. The headdress of each hussar regiment was a different colour, and the regiment number was marked on the left of the shako. The band running around the upper rim of the shown shako indicates the rank of Lieutenant-First Lieutenant. The 1904 M cavalry officer sabre was worn by officers of the Austro-Hungarian cavalry and mounted units such as the artillery. The facade and views of the interior of the Stefania Palace are depicted on the numbered souvenir sheet with a face value of HUF 500 plus a HUF 300 surcharge. The purpose of the building, opened in 1895 under the name the Park Club, was to provide a place for social gatherings for the nobility. The two-storey neo-baroque building has spacious halls, broad balconies and wide staircases laid out to the taste of the aristocracy of the period. The building was damaged in World War II and underwent a complete reconstruction in 1965, when it was refurbished in neo-baroque style. It has been officially called the Stefania Palace since 1993 and its main function is to provide an exclusive venue for the events of the Ministry of Defence and the Hungarian Defence Forces. The first day cover of the set of two stamps shows a stylised depiction of an 1869 M infantry standard, while the facade of the Stefania Palace appears on the first day cover of the souvenir sheet. Source: Baczoni Tamás – Jamrich Viktor – Sallay Gergely; www.lasdbudapestet.blogspot.hu; www.wikipedia.org