Albrecht Dürer was born 550 years ago 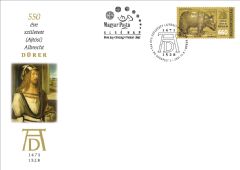 Magyar Posta is commemorating the 550th anniversary of the birth of Albrecht Dürer by issuing a special stamp. Fifty thousand copies of the special stamp designed by the graphic artist György Kara were produced by ANY Security Printing Company. The new issues are available from Filaposta, philately specialist services, certain post offices and www.posta.hu. Albrecht Dürer (Nuremberg, 21 May 1471 – Nuremberg, 6 April 1528), the German painter, printmaker, book publisher and author of Hungarian origin, was the eldest son of a goldsmith, Albert Ajtósi, who was born in the village of Ajtós near Gyula in Hungary. “Dürer” (initially “Türer”) is a translation of the Hungarian place name based on the word meaning “door”. Albrecht Dürer is one of the most celebrated and distinguished Renaissance artists. His oeuvre spans paintings on major religious themes, fine engravings, woodcuts, and a huge quantity of book illustrations as well as self-portraits. The stamp features a post-1620 print of Dürer’s famous woodcut of a rhinoceros. The original image was made in 1515 based on a sketch and description by an unknown artist of an Indian rhinoceros which had been transported to Lisbon and was the only live specimen of its species in Europe for a long time. Although the woodcut is not a precise representation of a rhinoceros, it has been said of the image that “probably no other animal picture has exerted such a profound influence on the arts”. A self-portrait by the artist appears on the first day cover, and the postmark bears the artist’s “patented” monogram.