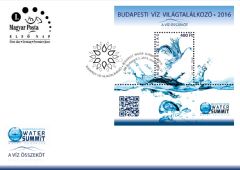 Magyar Posta welcomes the World Water Summit to be held in Budapest between November 28 and 30, 2016 by issuing a special miniature sheet of postage stamps. As part of the graphic composition created on the miniature sheet by designer Anita Laczkó, one can see an enchanting, unique bird motif standing out of the water and shaped from water droplets. With this the composition makes a reference to the water as a life-giving source. The edge of the sheet contains the logo of the event as well as the QR code which provides access to the World Summit’s website. The main theme of the commemorative envelope is the World Summit’s logo and its slogan. The flower motif shaped from water droplets on the commemorative stamp is complemented with an orderly inscription arranged on a wave line. The novelty has been produced in 80,000 copies by ANY Biztonsági Nyomda, and will be available from November 21 at first day cover post offices and at Filaposta. It can also be ordered from Magyar Posta's webshop. The aim of the Budapest Water Summit 2016 held with the patronage of President János Áder and organised by the Government of Hungary in cooperation with the World Water Council is to facilitate that, instead of new, 21st century conflicts and global risks, water becomes the source of cooperation, peace and development for all those countries in the world which choose the path of sustainable development. To this end, by discussing and adopting "Budapest Declaration 2016”, the participants of the event will offer their proposals for solution to be submitted at the relevant international fora. The Water Summit builds on the success and results of the 2013 event in Budapest, the sustainable development programme for the period until 2030 adopted by the UN Member States, and those of the Paris Climate Summit. Among the invitees of the conference are the United Nations specialized agencies dealing with water, sanitation and sustainable water management issues as well as other relevant international institutions; furthermore, representatives of governments, business and academia, and all those who can greatly contribute to the elaboration of the plans for the implementation of objectives for the water-related global sustainable development. (Source: budapestwatersummit.hu)