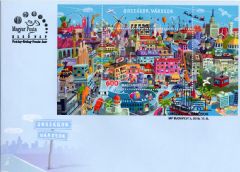 Magyar Posta is releasing its newest miniature sheet entitled Countries and Cities. The stamps which are produced using an individual way of presentation show places of interest and features of the European Union’s member states. In the graphic composition that is themed as a patchwork, the design that is characteristic of designer Zsolt Vidák and which offers a montage-like display the reality is mixed with fiction. 95,000 copies of the novelty have been manufactured by ANY Biztonsági Nyomda Nyrt. The stamp is available at first-day post offices and Filaposta from November 8, but can also be ordered from Magyar Posta’s online shop. An exciting discovery tour, an arm-chair cruise is awaiting all those who plunge themselves - with a magnifying glass - into an in-depth scrutiny of the “Countries and Cities” miniature sheet of postage stamps. Without providing an exhaustive list and retention of sequencing, the following countries, cities and places of interest can be discovered in the composition: From Great Britain - the world of ports, the London Eye and Big Ben; from Paris - Arc de Triomphe and the Eiffel Tower; from Luxembourg - the Golden lady; from Brussels - the Atomium; from Lisbon - the aqueduct (Aqueduto das Águas Livres) and the world-famous tram; the Church of the Holy Family in Barcelona and the Metropolis in Madrid; from Denmark - the statue of the Little Mermaid; from the Netherlands - the windmills and tulips; from Germany - the Brandenburg Gate and the Berlin TV tower; the Old Town Hall in Prague; the Bratislava Castle; in Ljubljana the Fountain of the Three Carniolan Rivers; St. Stephen's Cathedral in Vienna; the Stone Gate in Zagreb; from Budapest - the Statue of Liberty, the Keleti Railway Station, the Chain Bridge, the Danube and the Danube bank; from Sweden - the Vasa Ship; from Italy - the Leaning Tower of Pisa and the Colosseum in Rome; the Maltese lighthouses; the Town Hall Square in Riga; the National Museum of Finland in Helsinki; from Romania - the modern building of the AFI Palace Cotroceni shopping and entertainment centre in Bucharest and the Bucur Church; the Palace of Culture and Science in Warsaw; Tall Hermann Tower in Tallinn; Gediminas’ Tower in Vilnius; Alexander Nevsky Cathedral in Sofia; the Acropolis in Athens and the line of hotels and beaches in Cyprus. In addition, country-specific architectural and design elements, stereotypes and fantasy make the graphic artwork even more colourful and exciting.