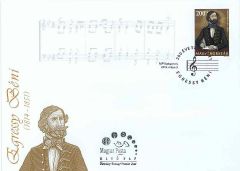 Magyar Posta is marking the bicentenary of the birth of the versatile composer, librettist and translator Béni Egressy, who set the patriotic poem Appeal to music, with a commemorative stamp issue. A portrait of Béni Egressy (1814-1851) can be seen in the stamp design. A detail of the score of Appeal adorns the margin of the miniature sheet. Eighty thousand copies of the miniature sheet designed by István Orosz were produced by the printing company Pénzjegynyomda. The new issue will be available at large post offices and Filaposta in Hungary from 9 May, but may also be ordered from Magyar Posta’s online store. Béni Egressy, whose original name was Benjámin Galambos, was born on 21 April 1814. His father, a Reformed Church pastor, introduced him to the beauty of music. After attending the well-known Reformed College in Sárospatak, he held a teaching post for a while. His interest turned towards acting and he appeared with companies in Kassa (now Košice, Slovakia) and Kolozsvár (now Cluj-Napoca, Romania) before taking the stage in Buda. Egressy was given a contract with the company of the Pest Hungarian Theatre in 1837. He performed as a chorus singer, and an actor of prose and song. His knowledge expanded constantly as he studied music seriously as well as music theory and languages, and he went to Italy for voice training. Egressy played baritone roles at the National Theatre. He began composing regularly in 1840, writing music for Petőfi’s poems, and proved to be a prolific songwriter. His work won the competition to set the patriotic poem Appeal to music. Egressy not only translated plays and musical dramas, but also wrote libretti. He was the author of the texts for Ferenc Erkel’s operas Bátori Mária, Hunyadi László and Bánk bán. He fought in the 1848-49 War of Independence, and was wounded at the Battle of Kápolna. During his sojourn in Komárom he composed the Klapka March in 1849. Following Hungary’s defeat in the War of Independence, Egressy continued his multi-faceted artistic activities at the National Theatre. His fruitful career was cut short when he contracted tuberculosis. Egressy died in Pest in 1851 at 37 years of age. (Source: filharmonia.com)