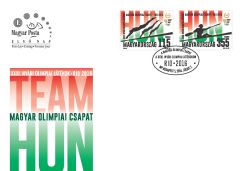 Magyar Posta is honouring the largest sports event in the world, the 31st Summer Olympic Games, with a stamp issue. The special set of two stamps was designed by the graphic artist Orsolya Kara and produced by the printing company Pénzjegynyomda. Stamps are customarily issued to mark the Olympic Games and on this occasion the sports portrayed on them are swimming and kayaking. The date of issue of the set of stamps is the day the Hungarian athletes swear their official oath, 7 July 2016. The new issue is available at first-day post offices and Filaposta in Hungary from the date of issue, but may also be purchased from Magyar Posta’s online store. The International Olympic Committee decided at its 121st congress in October 2009, which was held in Copenhagen, that Rio de Janeiro would host the 2016 Summer Olympic Games and the subsequent Paralympic Games. The opening and closing ceremonies will be held in the Maracana stadium on 5 August and 22 August respectively. At the Rio Games, 10,500 athletes from over 200 countries will compete in 161 men’s, 136 women’s and 9 mixed disciplines, totalling 306 events in all. The Hungarian Olympic Committee, as a founder member of the International Olympic Committee, celebrated the 120th anniversary of its foundation in December 2015. Until now, the Hungarian team has won 168 gold, 148 silver and 170 bronze medals at the Summer and Winter Olympic Games of the modern era. The sports in which the Hungarian team has had the most success are first fencing (35 golds), second swimming (25 golds) and third canoe-kayak (22 golds). The Hungarian team for Rio is expected to have 160 athletes in 22 sports. The now customary swearing of an oath will take place on 7 July before Rio. The oath swearing, when selected athletes promise in the spirit of good sportsmanship to do their utmost to achieve success for their country, has become an important and integral part of the run-up to the Hungarian Olympic team’s travelling to the Games. The first such oath was sworn by Hungarian athletes before the 1936 Berlin Olympics, and on the last occasion, before the London Olympics, the noble words were spoken by the swimmer Zsuzsanna Jakabos, the water polo player Tamás Kásás and the wheelchair fencer Gyöngyi Dani. Source: Hungarian Olympic Committee