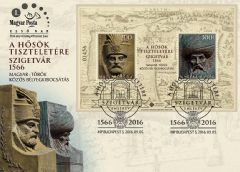 Hungary and Turkey are commemorating the 450th anniversary of the Siege of Szigetvár by issuing a joint stamp. The block containing two stamps is the work of Attila Elekes, fifty thousand copies of which were produced by ANY Security Printing Company. The new issue will be available while stocks last at first-day post offices and Filaposta in Hungary from 5 September, but may also be purchased from Magyar Posta’s online store. A depiction of Szigetvár from the period serves as the background of the block, while the stamps and the first day cover show the statues of Miklós Zrínyi and Suleiman the Magnificent by the sculptor Metin Yurdanur in the Hungarian-Turkish Friendship Park in Szigetvár. In the history that links the Turkish and Hungarian peoples, which was at times tempestuous, there have been numerous events over the centuries that in retrospect were turning points and are remembered respectfully by both parties today. To quote the Hungarian poet Attila József, “Out of the blood our fathers shed in battles/ flows peace, through our remembrance and regard.” Suleiman the Magnificent was one of the greatest conquerors of the Ottoman Empire and the last warrior sultan. He took part in thirteen military campaigns and it is perhaps symbolic that the first and last of these he led against Hungary. However, his importance was not merely as a conqueror but also as a statesman. During his reign the administration of the empire was reformed, a system of state land tenure to provide a financial basis for regular military campaigns was set up, Ottoman religious and secular law was integrated, large cities were developed and the classic form of Ottoman architecture came to fruition. This was when everything that posterity describes as classic Ottoman civilisation came into being and this is why Suleiman was given the sobriquet Magnificent, Magnifique and Prächtig in Europe and posthumously came to be known in his own country as Kánuní, the Law-Maker. Miklós Zrínyi, who was descended from the Šubič people, one of the Croatian clans, initially took part in the defence of Croatian areas. His father, uncle and brother all perished fighting against the Ottomans. In 1542 he was appointed Ban of Croatia and Slavonia by King Ferdinand and in 1546 he was given the whole county of Muraköz including the castle of Csáktornya for his deeds in the struggle against the Ottomans. He became the commander of Szigetvár Castle in 1561. He established the greatness and prestige of the Zrínyi family, being the first to receive the rank of ban and obtaining the wealth that was the basis of his influence in Hungary. The lesson that may be drawn from the Siege of Szigetvár is that for both an outstanding ruler of a great empire and a Central European hero their principles and values were more important than their own lives. Sources: A magyarok krónikája [Chronicle of the Hungarians], Budapest 1995; Zrínyi Miklós - A szigetvári hős [Miklós Zrínyi - The Hero of Szigetvár] (Supplement of Múlt-kor history magazine 2016); www.rubicon.hu (Tarján M. Tamás: 1566. augusztus 6. - Szulejmán ostrom alá veszi Szigetvárt) [6 August 1566 – Suleiman Lays Siege to Szigetvár]