Jan Jessenius was born 450 years ago 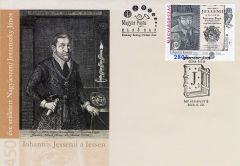 The Czech Republic, Hungary, Poland and Slovakia are commemorating the 450th anniversary of the birth of Jan Jessenius by issuing a joint stamp with a label. The creative design for the postage stamp and the adjoining label was conceived by the artist Vladislav Rostoka based on the motif of the German graphic artist Lucas Kilian made in 1618, while the engraving was made by the artist František Horniak. 240,000 copies were produced by the postal printing company PTC Praha. The new issue will be available at first-day post offices and Filaposta in Hungary from 22 June 2016, but may also be purchased from Magyar Posta’s online store. Jan Jessenius was descended from the old Hungarian noble family of Jeszenszky from the village of Nagyjeszen in present-day Slovakia. An eminent scholar in several areas, he always styled himself Magna Jessen Eques Hungarus (Hungarian knight) and took an active part in the political life of the period. He was born in Breslau (today Wrocław) on 27 December 1566, where it is thought that his father had taken refuge from the threat posed by the Ottomans to the family seat in the county of Turóc. At the age of 17 he began studying medicine at Wittenberg University, then furthered his medical studies while also reading philosophy first in Leipzig and, from 1588, as a medical student in Padua. In 1594 Friedrich Wilhelm, Duke of Saxe-Weimar, appointed him professor of surgery and a short while later professor of anatomy at Wittenberg University, where he became rector in 1597. In 1599 he was the first to perform a public dissection on a female corpse and in June 1600 he conducted a public dissection lasting four days in Prague, which attracted much attention. His professional prowess is indicated by the fact that in 1602 he was summoned to Prague University by the Holy Roman Emperor Rudolph II and appointed physician to the imperial court. He continuously exchanged ideas on the movement of celestial bodies and the structure of stars with several astronomers of the period. Johannes Kepler devised his concept of refraction used in astronomical telescopes based on the experiments of Jessenius on the lens of the eye and the experiences of the public dissection. During the reign of Matthias II, he retained his position as the court physician and in the autumn of 1617 he was appointed rector of Prague’s Charles University. In 1618 he became involved in the anti-Habsburg movement of the Czech Estates through his family and university contacts, his political commitment and his activity in the conflict of the Reformation and Counter-Reformation. He went on a diplomatic mission to Pressburg (today Bratislava) but was arrested and imprisoned in Vienna. Later, he attended the Diet of Besztercebánya and negotiated with the Prince of Transylvania Gábor Bethlen. After the Battle of White Mountain, whose outcome was disastrous for the Czech Estates, he was put on trial for high treason, condemned and executed on 21 June 1621. His diverse oeuvre included historical and philosophical works as well as theological treatises, while his endeavours as a professor of anatomy and surgery brought a new spirit to the teaching of medicine. He familiarised his students with anatomical findings that had not been discussed before, contributing to the universal history of medicine. The Czech Republic, Poland, Hungary and Slovakia are paying tribute to his life’s work through the joint issue of this special stamp with the same design. Source: Rezsabek, Nándor, ‘Orvosprofesszor és csillagász (Jeszenszky [Jessenius] János emlékezete)’ [Professor of Medicine and Astronomer (In Memoriam Jan Jessenius] in Evangélikus Élet 2006/52.; Schultheisz, Emil, ‘Jeszenszky (Jessenius) János’