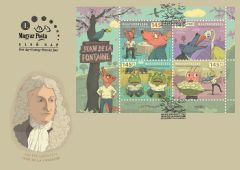 Magyar Posta commemorates the work of the French writer Jean De La Fontaine on the occasion of the 400th anniversary of his birth by issuing a special miniature sheet. Magyar Posta will use the amount of the surcharge received from the purchased miniature sheets which contain two stamps with surcharge, i.e. a total of HUF 150 per miniature sheet, to support the collection of stamps by youth. The special miniature sheet consisting of four stamps was produced by the ANY Biztonsági Nyomda Nyrt. in 20 000 copies, based on the plans of graphic artist Zsolt Vidák. The new issue is available from Filaposta, philately specialist services, certain post offices and at www.posta.hu. Jean de La Fontaine (Château-Thierry, 8 July 1621, Paris – 13 April 1695) was a French writer and poet. At a young age, he wanted to become a priest, but later he chose the legal profession and worked as a lawyer. He then left his office and devoted most of his life exclusively to literature. He became famous for his poetic fables which are witty, instructive stories. His fables were published in 12 books, the first six being written for the young heir to the throne, for which he translated Phaedrus’s well-known fables into French in poetic form. The next six were written not so much for children, but for the adult readers. Woven into fairy tales, he criticised the social morals of his age, the failings of humans, with sharp irony. Each stamp denomination on the special miniature sheet includes illustrations of famous fables: The Town Mouse and the Country Mouse, The Wolf and the Stork, The Two Bulls and the Frog and The Grasshopper and the Ant. The framework drawing shows a drawing composition of the fable The Raven and the Fox. The special envelope features a portrait of Jean de La Fontaine, and the postmark also contains the image of a raven with a piece of cheese in its beak from the fable called The Raven and the Fox.