József Romhányi was born 100 years ago 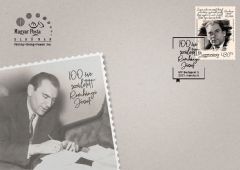 Magyar Posta is commemorating the centenary of the birth of the writer József Romhányi by issuing a special stamp. Fifty thousand copies of the special stamp designed by the graphic artist Glória Hefelle were produced by ANY Security Printing Company. The new issue is available from Filaposta, philately specialist services, certain post offices and www.posta.hu. József Romhányi (Nagytétény, 8 March 1921 – Budapest, 7 May 1983) was a Hungarian writer, poet, literary translator and artist of merit. He worked as a literary editor for Hungarian Radio and then as the artistic director of the Hungarian State Concert and Programme Directorate. Later, he became the artistic director of Hungarian Television’s popular art section and was the literary editor of the Music Department of Hungarian Radio from 1962 until his death. He wrote the libretti of numerous Hungarian operas, and translated the libretti of foreign operas and musicals. The best known of the latter is Cats, which has continuously been performed for almost 40 years. Almost every Hungarian is familiar with his playful animal verses posthumously published under the title Szamárfül (having the double meaning of “donkey’s ear” or “earmark”), but his name is also associated with many cartoons such as The Mézga Family, Dr. Bubó, Mekk Elek, and his stupendous translation of The Flintstones. He himself created his own epithet rímhányó, literally meaning “rhyme spewer”, an anagram of his surname, which he is now commonly known by. A portrait of József Romhányi appears on the stamp, and the writer and poet at work is featured on the first day cover.