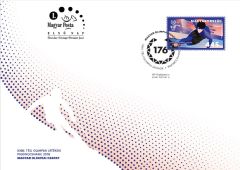 Magyar Posta in cooperation with the Hungarian Olympic Committee is honouring the largest event in winter sports of 2018, the XXIII Olympic Winter Games, by issuing a stamp. The commemorative stamp was designed by the graphic artists Luca Héjja and László Ördögh, and produced by ANY Security Printing Company. The new issue will go on sale from 2 February 2018 and from that date will be available at first day post offices and Filaposta in Hungary but may also be ordered from Magyar Posta’s online store. For two weeks between 8 and 25 February 2018, the attention of sport lovers around the world will be focused on PyeongChang, South Korea, where the XXIII Olympic Winter Games will be held. PyeongChang submitted bids for the 2010 and 2014 Winter Games, and was selected as the host city for 2018 at its third attempt in the first round of voting of the International Olympic Committee in 2011. The city lying at an altitude of 700 metres above sea level and the surrounding area is a marvellous location for winter sports. The event provides an excellent opportunity with superb facilities and an ideal location for the world’s best winter sportspersons to vie with each other for glory for themselves and the countries they represent. The largest contingent in the Hungarian team is the short track speed skaters as both the men’s and women’s relays qualified to take part, thus the maximum of ten can travel to the Games. To date Hungary has won six medals (two silvers and four bronzes) at the Winter Olympics, all in figure skating. Hungary’s last medal winners were the ice dance pair skaters Krisztina Regőczy and András Sallay, who came second at Lake Placid in 1980. The stamp captures a moment from one of the new Hungarian success sports, short track speed skating, while the silhouette of a skier appears on the first day cover. The main motif of the special postmark is the number 176, the total number of Olympic gold medals won by sportsmen and -women in Hungarian colours so far, surrounded by a laurel wreath. The organisers believe that staging the Games successfully will promote winter sports in Asia and attract people to them, contribute to the economic development of the Gangwon region in South Korea, and encourage new generations talented in sport to join the Olympic movement. Sources: www.olimpia.hu; www.olympic.org; www.pyeongchang2018.com; www.wikipedia.org