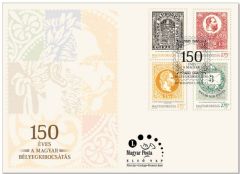 Magyar Posta is commemorating the 150th anniversary of the issue of the first Hungarian postage stamp by issuing a special miniature sheet. Thirty-nine thousand copies of the miniature sheet designed by the graphic artist Attila Elekes were produced by the banknote printing company Pénzjegynyomda Zrt. The new issue will be available at first day post offices and Filaposta in Hungary from 1 June, but may also be ordered from Magyar Posta’s online store. The stamp is a tiny surface that, in spite of its size, carries a mass of information showing a special visual world arising from human existence and the co-existence of man and nature. The postage stamp may be brightly coloured or composed of subtle tones, may show minute details or focus on only the key features, may connect or differentiate, but one characteristic always remains the same: it is a means of paying postage. Even by historical standards one hundred and fifty years are a considerable period of time, and over its course many new generations have grown up, events that have revolutionised our everyday lives have occurred, trends have come and gone, and once unimaginable scientific and technical innovations have become part of ordinary life. These changes can also be followed through the over 5,200 Hungarian stamp issues. This is evident in not only the topics chosen, but also the change in the range of postal services payable with stamps, the printing technology, the quality and availability of postage stamps as well as the face value and the value that accrues among philatelists in the years after release. Magyar Posta is celebrating this special jubilee with three philatelic issues. The first issue is a miniature sheet with four different stamps illustrating the beginnings of Hungarian stamp issuance and the process of the company becoming independent from a philatelic aspect, commencing with the first stamp design, followed by the first Hungarian stamp issue, then the first stamps printed in Hungary and finally the first postage stamp bearing a Hungarian inscription. The first stamp of the miniature sheet shows the earliest design for a Hungarian stamp, a pen and ink drawing by Mór Than made in 1848, at the time of the Hungarian war of independence from Austrian rule. Due to Hungary’s defeat in this conflict, the design was never made into a stamp but now, after almost 170 years, it can fulfil its originally intended function. On the second stamp of the miniature sheet the 2-krajcar denomination of the first stamp series of the Hungarian postal administration, which gained independence in 1867, is shown. In the absence of production capacity in Hungary, the stamp was ordered from the Imperial and Royal Stationery Office in Vienna and produced by letterpress printing. The third stamp is a reproduction of the 5-krajcar denomination of a set of stamps issued in 1871 both by lithographic and copperplate printing, which was by then produced at the Hungarian Royal State Printers in Hungary. The fourth stamp of the miniature sheet depicts the 3-krajcar stamp of the 1874 postage stamp series, which bears the first inscription in Hungarian, meaning “Hungarian Royal Post”. The masterpieces created by issuing stamps are minuscule works of applied graphics that show Hungarian and universal events and values, and are understandable all around the world without any knowledge of the language. Magyar Posta wishes to express its gratitude for the endeavours of all the people involved over the last one hundred and fifty years, be they designers, printing specialists, postal employees or managers. Issuing stamps is not an activity with an end in itself, and so we also wish to thank generations of stamp collectors for their unceasing interest and for the related research activity of high academic standard, and hope that we have also succeeded in uniting aesthetics and practicality in each issue for customers purchasing stamps with the aim of paying for postage. Our value creation activity will be continued in the decades to come in order to support postal services, to preserve an impression of the age in the coming years and to promote Hungarian values. Sources: Stamp Museum; Gabriella Nikodém and Jenő Szabó: A magyar bélyeg története (History of the Hungarian Stamp) Budapest 2010; Visnyovszki Gábor: Bélyegkönyv (Stampbook), Budapest 1996