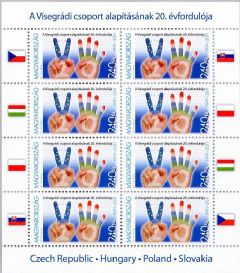 The Group is named after the town of Visegrád in the north of Hungary. In November 1335, on the initiative of the Hungarian king Charles Robert, a meeting was held in the royal palace in Visegrád with the Polish monarch Casimir III and the king of Bohemia, John of Luxembourg. This cooperation was continued on 15 February 1991 when Czechoslovakia’s President Václav Havel, Poland’s President Lech Wa³êsa and Hungary’s Prime Minister József Antall signed the Visegrád Declaration. After the dissolution of Czechoslovakia in 1993, it became a four-member group. Among the objectives of the 1991 declaration were the elimination of the vestiges of totalitarianism, the protection of democracy, and the collaboration of the three countries to promote economic progress and Euro-Atlantic accession. In 2000 the International Visegrád Fund, based in Bratislava, was created, which is widely thought to be the V4’s most successful venture. It strengthens cooperation between the member states in culture, science, research and education, and fosters ties through youth exchanges. Thanks to the Fund’s budget, applications from the four member states can be made to the Bratislava Secretariat for grants several times a year. The Fund’s activities also include providing humanitarian aid. (Source: visegradgroup.eu, hu.wikipedia.org) The main motif of the stamps marking the anniver-sary are hands forming the letter “V” and the number “4”, enriched by a motif referring to the European Union and the colours of the national flags of the V4 member states. The numerals 2 and 0 on the palms of the hands refer to the 20th anniversary. A special aspect of the issue is that the stamps in all four countries have been made based on the designs of the Hungarian graphic artist and stamp designer Barnabás Baticz. On the first day cover there is a graphic composition using the flags of the member states. The postmark employs the contour of the maps of the countries comprising the group. A commemorative card is also being released to present the stamps of the four countries together.