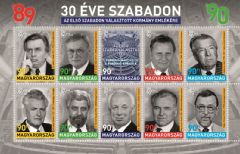 Connected to the “30 Years of Freedom” memorial year, this year Magyar Posta is issuing a commemorative miniature sheet about the members of the first freely elected government. Twenty thousand copies of the miniature sheet consisting of 10 stamps designed by the graphic artist Attila André Elekes were produced by ANY Security Printing Company. The products are available from Filaposta, philately specialist services, certain post offices and www.posta.hu. Thirty years ago, after a forty-year period of a one-party state – as an achievement of the Hungarian people’s continuous, steadfast perseverance – on 25 March and 8 April 1990 the first free multi-party parliamentary elections were held in the country. The conditions and framework for this were devised at National Round Table Discussions while its legal basis was laid down by Act XXXIV of 1989. At the elections the parties intent on changing the regime had an overwhelming victory. On the stamps of the miniature sheets, nine of the since then deceased members of the first freely elected government are presented: Dr József Antall, prime minister, Dr István Balsai, minister of justice, Dr Lajos Für, minister of defence, Jenő Gerbovits, minister without a portfolio, Sándor Győriványi, minister of labour, Dr Balázs Horváth, interior minister, Dr Ferenc Mádl, minister without a portfolio, Ferenc József Nagy, minister of agriculture, and Ferenc Rabár, minister of finance. On the tenth stamp, the chamber of the Parliament and on the cover the building itself can be seen. The moment of casting a vote is used for the commemorative postmark.