30th anniversary of the formation of the Visegrád Group 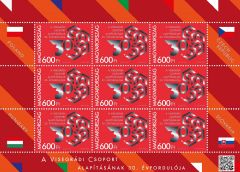 The Czech, Polish, Hungarian and Slovak Posts are commemorating the 30th anniversary of the formation of the Visegrád Group by issuing a joint stamp. The miniature sheet has been produced in all four countries based on the design of the Polish stamp designer Agnieszka Sobczyńska, and was made in Hungary in 10,000 copies by ANY Security Printing Company. The new issue can be purchased from Filaposta, philately specialist services, certain post offices and www.posta.hu. The objectives of the Visegrád Group are to strengthen the stability of the Central European region, to jointly represent the economic, diplomatic and political interests of the member states and to coordinate their measures. The Visegrád Declaration, signed on 15 February 1991, asserted the solidarity between the countries and then, in 2000, the International Visegrád Fund based in Bratislava was established in order to foster cooperation between the countries in the fields of culture, science, research, education and youth exchange relations. It is interesting to note that the name of the group stems from the international meeting arranged by King Charles Robert of Hungary at the royal palace in Visegrád in 1335. The four interlocking elements linked to the number of the anniversary in the stamp design refer to the cooperation of the member states while retaining their independence. The flags of the four countries appear on the first day cover, and the postmark features the contours of the maps of the member states.