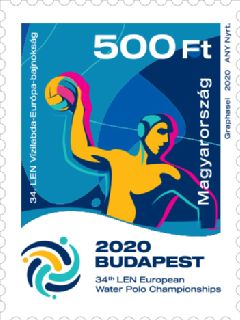 Magyar Posta is marking the 34th LEN European Water Polo Championships, which are being held in Hungary, by issuing a special stamp. Fifty thousand copies of the stamp were produced by ANY Security Printing Company based on the designs of the artists of the Graphasel Design Studio: Csaba Attila Dobos graphic artist and László Ördögh art director. The new issue will go on sale from 10 January 2020 and from that date will be available at first day post offices, Filaposta, philately specialist services, certain post offices and www.posta.hu. This is the fifth occasion that Hungary has hosted the adult European water polo championships, which will be staged between 12 and 26 January 2020 in the world-class centre for swimming and water sports, the Duna Aréna in Budapest. The first European championship was held in 1926 and, to avoid clashing with the summer Olympics, the second was held in 1927 and the third in 1931. The continental encounters became more and more successful every time the event was held. In water polo the first women’s European championship was staged in Oslo in 1985. This branch of sport broke away from swimming in 1997, when the first independent water polo championship was organised in Europe. Currently the competition is held every two years, in the summer midway through the Olympic cycle and at the beginning of the year in years when the Olympics are staged. A male water polo player in action is shown on the special stamp while a woman playing water polo appears on the first day cover. The official logo of the 34th LEN European Water Polo Championships appears on the stamp, first day cover and postmark alike.