Centenary of the birth of Saint Pope John Paul II 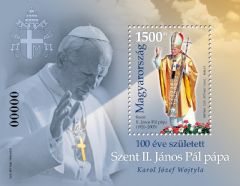 Magyar Posta is commemorating the centenary of the birth of Saint Pope John Paul II by issuing a souvenir sheet. The souvenir sheet, its special editions and the related philatelic products designed by the graphic artist Barnabás Baticz were produced by ANY Security Printing Company. The products are available from Filaposta, philately specialist services and certain post offices, or may be ordered by email from philately@posta.hu or on the website www.posta.hu. Saint Pope John Paul II (born Karol Józef Wojtyła, Wadowice, 18 May 1920 – Rome, 2 April 2005) was the 264th head of the Catholic Church, the first pope not of Italian origin for 455 years, and the first who was from a Slavic people. Throughout his papacy, he promoted understanding between peoples and religions, and in this spirit apologised for the sins of the Church in the past. His doctrinal teaching was typified by conservatism, and his stance on human life and dignity. He made over 100 pastoral visits outside Italy, travelling further than all previous pontiffs. He beatified 1,338 people and canonised 428. He himself was canonised on 27 April 2014, Divine Mercy Sunday. The stamp and frame of the souvenir sheet were designed using photographs taken on Pope John Paul II’s visit to Budapest in 1991. The stamp features the arrival of Pope John Paul II at Heroes’ Square, where he celebrated mass on Saint Stephen’s Day. The moment when the Holy Father blessed the infirmed and the elderly in Saint Stephen’s Basilica is captured in the frame of the souvenir sheet. The interior of the cupola of Saint Peter’s Basilica in the Vatican is shown on the first day cover, and the commemorative postmark is a stylised drawing of the papal seal. In addition to the standard, black-numbered edition, a red-numbered imperforated and a green-numbered specially perforated edition of the souvenir sheet, and an exclusive stamp set are being issued. The stamp set contains a standard edition of the commemorative souvenir sheet as well as a red-numbered imperforated and a green-numbered specially perforated edition, plus a black print, the last of which is only available as part of the set. The souvenir sheets and the black print are protected in mounts. The stamp set sold in a resealable plastic case comes with a numbered Certificate in Hungarian and English bearing an embossed postal seal verifying its authenticity. All the editions in each set of the 1,000 sets issued bear the same serial number in the number range between 1 and 1,000. The red- and green-numbered souvenir sheets with serial numbers above the 1,000 number range are also available for sale outside the set. The black print may not be used to pay for postage.