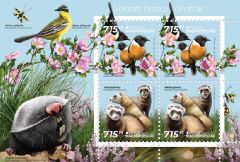 Each year the members of the Association of European Postal Operators (PostEurop) issue stamps on a common theme to present the identical values of their states. The “EUROPA stamp” is still one of the most popular themes for collectors, and issues bearing the official logo are among the most sought-after new stamps. In 2021 the member countries are presenting the theme of endangered national wildlife. The Hungarian miniature sheet consisting of two pairs of stamps was designed by the graphic artist Tibor Z. Petényi of which 20,000 copies were produced by ANY Security Printing Company. The new issue is available from Filaposta, philately specialist services, certain post offices and www.posta.hu. Wildlife in Hungary is protected by law. All forms of cruelty to, and disturbance, endangerment and destruction of them or damaging their habitats are strictly forbidden. One of the stamps of the Hungarian miniature sheet features a songbird and the other a mustelid species. The stonechat is a migratory passerine species which nests in Hungary from March until October. It was chosen the bird of the year in 2021. The steppe polecat is a small predator which occurs mainly on the fringes of the grasslands and agricultural areas of Transdanubia and the Hungarian Great Plain. It has a lighter coat and is more aggressive than the European polecat. Other animal species characteristic of Hungary are shown in the frame of the miniature sheet: the blind rodent living in loess and sandy areas of the Great Plain, the Hungarian lesser mole-rat; the black and yellow, specially protected lacewing species Libelloides macaronius, which feeds mainly on flying insects, and the yellow wagtail, named after its bright plumage, feeding mainly on flies and mosquitoes. Drawings of the stonechat and the steppe polecat appear on both the first day cover and the postmark.