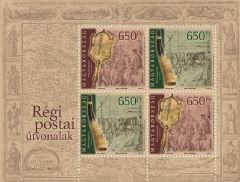 Each year the members of the Association of European Postal Operators (PostEurop) issue stamps on a common theme to present the identical values of their states. The “EUROPA stamp” is still one of the most popular themes for collectors, and issues bearing the official logo are among the most sought-after new stamps. In 2020 the member countries are presenting the theme of ancient postal routes. The Hungarian miniature sheet consisting of two pairs of stamps was designed by the graphic artist Attila André Elekes of which 20,000 copies were produced by ANY Security Printing Company. The new issue is available from Filaposta, philately specialist services, certain post offices and www.posta.hu. In the territory of Hungary at the time of Louis the Great in the 14th century, guilds established postal routes, which, besides their own correspondence, carried the letters of private individuals, while travelling merchants and craftsmen took the messages and orders of customers to distant places. One of the most well-known postal routes was that of the butchers. Armed drivers escorting cattle from the Hungarian Great Plain to markets abroad carried the correspondence of the cities and their burghers based on individual instructions. The main motifs of the stamp designs are a brass sign used by the butchers’ guild to officially summon meetings and a horn. The background of the stamps shows works by the painter and graphic artist László Balla, The Butchers’ Post Progressing Through Hungary and Diligence Crossing the Hortobágy Plain. In the background printing of the miniature sheet, John Speed’s early 17th-century copperplate engraving of a map of Hungary can be seen with views of four Hungarian cities and drawings of distinguished contemporary personages in the frame. The objects featured in the stamps are on display in the Diligence Room of the Post Museum in Debrecen.