Faculty of Agriculture and Food Science of the Széchenyi István University, Mosonmagyaróvár 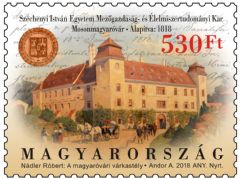 Magyar Posta is commemorating the bicentenary of the foundation of the Faculty of Agriculture and Food Science of the Széchenyi István University in Mosonmagyaróvár by issuing a special stamp. One hundred and fifty thousand copies of the stamp designed by the graphic artist András Andor were produced by ANY Security Printing Company. The new issue will be available at first day post offices and Filaposta in Hungary from 2 October, but may also be ordered from Magyar Posta’s online store. By virtue of its geographical features, Hungary has excellent opportunities for agriculture and the rich flora and fauna of the area were often mentioned in historic works from the medieval period. However, this natural wealth, the good soil and favourable climate are of little value without the human knowledge and skills which help farmers to produce abundant crops and livestock every year. In the past the survival of communities depended on the success of agriculture, while issues of the coexistence of man and nature and sustainable development are at the fore of agriculture today. These issues are fundamental topics of our times, which is why it is important to remember the past and current achievements of agricultural education. The Magyaróvár Higher School of Agriculture, the predecessor higher education institution of the Faculty of Agriculture and Food Science of the Széchenyi István University, was established in Magyaróvár in 1818. Prince Albert Casimir of Saxony, Duke of Teschen, and Sir Antal Denglázi Wittmann, an agricultural scholar of the Age of Reform, founded Europe’s first continuously functioning higher education centre for agriculture. In recognition of the educational activities carried out here, the school later worked as the only agricultural higher education institution in the Habsburg Empire, influencing the agriculture of Central Europe and its development. In the late 19th and early 20th centuries, a number of research institutes were formed in association with the educational centre then operating under the name of the Hungarian Royal Academy of Agriculture which were the cradle of Hungarian agricultural research today. In the 20th century, the institution in Mosonmagyaróvár was reorganised several times in parallel with changes in Hungary’s history, but the restructuring and changes of names did not diminish the accumulated theoretical and practical expertise. The graduates of the faculty today know the latest technical solutions and the results of agricultural research, and possess the knowledge required for agricultural development, but are also aware that their work can contribute to protecting our planet and nature. The main motifs of the stamp design are the painting Magyaróvár Fortified Palace by Róbert Nádler and the Alma Mater emblem with an extract of the institution’s founding charter in the background. The wax seal of the university and part of the founding charter appear on the first day cover. The special postmark features the bicentenary logo. Sources: www.ovarigazdasz.hu; www.uni.sze.hu