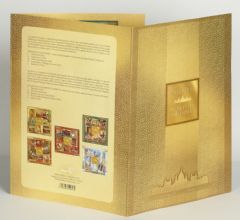 The House of Parliament in Budapest is Hungary’s best known and one of the world’s most beautiful public buildings. Magyar Posta presents the historic importance and unusual architectural solutions of the edifice through philatelic means. The commemorative miniature sheet issued in 2013 as part of a series contains eight stamps capturing some distinctive features of the dome hall and the hall of the main staircase. The sceptre in the perforated philatelic picture is adorned with genuine quartz crystal, and gold leaf, embossed printing and spot varnishing make the interior of the dome shown in the border remarkable. The numbered novelty may only be purchased in this exclusive compilation. The main staircase leads from the main entrance of the House of Parliament to the dome hall, where there is a bronze bust of the designer of the building, Imre Steindl, made by Alajos Stróbl in 1904. Eight deep red, six-metre-high, four-tonne granite slabs between the columns supporting the ceiling attract the eye. The ceiling is decorated by allegorical frescoes by Károly Lotz. The hexadecagonal, 20-metre diameter dome hall houses the Holy Crown, the sceptre, orb and sword of Hungary. The star vault is 27 metres high. The impressive hall is the structural and conceptual centre of the building. This and the wing of the main entrance were the first sections of the House of Parliament to be completed and the session celebrating the Millennium of the Hunga rian Conquest was held there in 1896. The Holy Crown of Hungary was first brought into the building for this occasion, which was commemorated by the statues in the main staircase of the pages bearing the crown jewels in their hands. The statues of the sixteen monarchs and their armorial bearings in the dome hall encapsulate the one thousand years of Hungarian history in a nutshell.