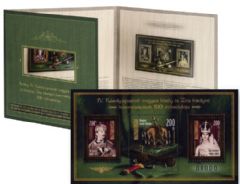 Magyar Posta continues its series of stamps on the theme of Hungarian saints and blesseds. The Hungarian Saints and Blesseds IV special stamp block commemorates the centenary of the coronation of Blessed Charles IV, Apostolic King, and Queen Zita. In addition to the standard edition of the numbered block containing three stamps, a special decorative edition with silver foil and embossing has been produced. The stamp blocks are also available in an exclusive set, which includes a limited edition black print that is only sold as part of the set. The issues were designed by the graphic artist Imre Benedek and produced by ANY Security Printing Company. The new issues are available at first-day post offices and Filaposta in Hungary from the date of issue, 17 August 2016, but may also be purchased from Magyar Posta’s online store. Blessed Charles IV (1887–1922) reigned as Charles I of Austria and Charles IV of Hungary between 1916 and 1918 and was the last Habsburg emperor and the last king of Hungary. He and his wife, Princess Zita of Bourbon and Parma, were crowned in Budapest’s Matthias church on 30 December 1916. Apart from the piety that was typical of the Habsburgs, his profound belief was evident from the start. Both as a child and as an adult, he was friendly, patient and pious. He found a worthy partner in his wife, and they brought up their children in their faith. Charles also won considerable admiration through his anti-war policy. He was beatified on 3 October 2004. His feast day is the day of their wedding, 21 October. His canonisation has begun. • Zita (1892–1989), Princess of Parma and Bourbon, was Empress of Austria and Queen of Hungary as wife of Charles IV between 1916 and 1918. After the collapse of Austria-Hungary, she was forced into exile with her husband and children. During the Second World War she moved to America, only returning in the last few years of her life. Her beatification has begun. Source: wikipedia.org; katolikus.at The special feature of the postmark is that it uses the commemorative postmark for the coronation on 30 December 1916, which was the first commemorative cancellation in Hungarian practice. Source: Nikodém G. – Szabó J., A magyar bélyeg története [History of the Hungarian Stamp] 4,000 sets were produced, containing the standard edition, the special edition numbered 1 to 4,000 and the black print numbered in the same way. The last of these may only be purchased as part of the set. The black print cannot be used as postage on mail.