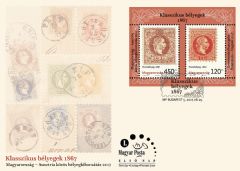 Magyar Posta is marking the issue of the first Hungarian postage stamp by a Hungarian-Austrian joint issue of a commemorative miniature sheet. Sixty thousand copies of the miniature sheet designed by the graphic artist Anita Kern were produced by ANY Security Printing Company. The new issue will be available at first day post offices and Filaposta in Hungary from 25 August, but may also be ordered from Magyar Posta’s online store. 1867 was a historic turning point for both the state of Hungary and the Hungarian postal service. In the wake of the passive resistance after the 1848 War of Independence and due to the effect of unfavourable international events for the Habsburg Empire, this was the year when a compromise was reached to restore Hungarian statehood and the Austrian Emperor Franz Joseph I was crowned King of Hungary. Austria-Hungary was created. This was known from its inception until the end of the period in 1918 as the dual monarchy and was one of the times in Hungarian history when the country flourished and prospered to the greatest extent. Under an agreement for the post, the postal services of Hungary and Austria separated, and one of the first measures of the newly independent Hungarian postal service was to order and bring into use its own postage stamps. However, compromises had to be made in order to issue the first stamps on 1 June 1867 because there was no print works in Hungarian territory that was equipped to produce postage stamps of the required quality and quantity. For this reason they were produced at the Imperial and Royal Stationery Office in Vienna. Of the series of seven stamps bearing the portrait of Franz Joseph, the 2, 3, 5, 10 and 15 krajcár denominations were released on 1 June and the 25 and 50 krajcár stamps on 1 September. For a long time whether these stamps were the first Hungarian stamps was the subject of debate as, on the grounds of saving time and money, the Austrian Post at its own discretion circulated this series with the same design in the other countries of Austria-Hungary as well. In this way the strange situation evolved where two separate postal administrations used stamps with the same design. Nowadays it is clearly accepted that those stamps which were demonstrably used in Hungarian territory, in other words were cancelled with Hungarian postmarks, are Hungarian stamps. The 1867 issue remained in use until 1871 when new postage stamps that were produced in Hungary appeared. However, in Austria and areas annexed to it, the 1867 stamps continued to be used to pay for postage and, as a result, they were used in far greater numbers in the affected areas than in Hungary. The stamps were printed initially by a crude technique and later an improved version was issued. In Hungary only the earlier crude stamps were circulated. The crudely printed 1867 edition of the 50 and 5 krajcár stamps appear in the joint issue and the background motif of the 5 krajcár stamp has been used for the border decoration. On the first day cover there is a montage of the original stamp series, and the graphic elements of the 5 krajcár stamp are also used for the special postmark. The Hungarian and Austrian miniature sheets and impressions of the special postmarks appear together with descriptions in Hungarian and German on the A5 commemorative card. Sources: Stamp Museum; Gabriella Nikodém and Jenő Szabó: A magyar bélyeg története, Budapest 2010; László Surányi and Gábor Visnyovszki (ed.): A magyar bélyegek kézikönyve, Budapest 1986; www.magyarhirlap.hu