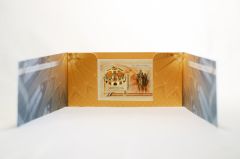 To mark the fifth anniversary of signing Hungary’s Fundamental Law, Magyar Posta is releasing the black numbered standard edition and the red numbered crystal edition of the stamp block entitled Hungary’s New Fundamental Law issued in 2011 in 4 000 copies each. The stamp block will be overprinted with Hungarian inscriptions meaning “Hungary’s Fundamental Law is 5 years old” and “25 April 2016”. The stamp block overprint and the related items were produced by ANY Security Printing Company based on the design of the graphic artist who made the 2011 issue, Imre Benedek. The new issue will be available while stocks last at large post offices and Filaposta in Hungary from 25 April. Hungary’s Fundamental Law is the most supreme legal source in the Hungarian hierarchy of law. On 18 April 2011 the Hungarian Parliament adopted the new Fundamental Law, which was ceremonially signed by the President of the Republic of Hungary on Easter Monday, 25 April 2011. The text of the new constitution entered into force on 1 January 2012. The Fundamental Law is the foundation of Hungary’s legal system. In this constitution, Parliament regulates Hungary’s legal order, lays down the fundamental rights and obligations of its citizens, and sets out the basic rules governing the state mechanism. The Fundamental Law is not a statute but the highest source of law: all other legislation is derived from this and has its origin in this, thus no statue may run counter to the Fundamental Law. Source: kormány.hu The main motif of the numbered philatelic speciality is the Holy Crown of Hungary. The stamp block was made using embossing, twenty-three carat gold leaf and offset printing, and under UV light the inscription in Hungarian “May there be peace, freedom and concord” is visible. The first day cover for the overprinted block comes in a special folder designed for the occasion. The red numbered block adorned by crystals is sold in protective packaging.