Ignác Semmelweis was born 200 years ago 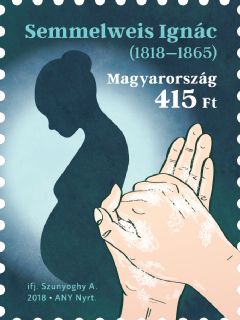 Magyar Posta is commemorating the bicentenary of the birth of Ignác Semmelweis by issuing a special stamp. Two hundred thousand copies of the stamp designed by the graphic artist András Szunyoghy Jr were produced by ANY Security Printing Company. The new stamp will go on sale from 30 June 2018 and from that date will be available at first day post offices and Filaposta in Hungary but may also be ordered from Magyar Posta’s online store. Ignác Semmelweis (1818–1865), obstetrician and gynaecologist, professor and one of the best known figures of Hungarian medicine, is often referred to as the “saviour of mothers”. Born in Buda, he attended university in Pest and Vienna, graduating as a medical doctor and then qualifying in surgery and obstetrics in Vienna. He began his career there, making clinical and pathological observations which led him, at the age of 29, to discover not only the cause of puerperal fever and but also the method to prevent it. Semmelweis had systematically studied all the contemporary ideas and explanations of the cause of the disease, but found none of them satisfying. He worked around the clock dissecting and devotedly analyzing the statistics he had collected. He noticed that the mortality rate of births at home and in the midwives’ wards was considerably lower than that at the university clinics training doctors. The death of a colleague who had his hand wounded during an autopsy and whose own autopsy report was almost identical to mothers who had died of childbed fever made him realise that the cause of the disease lay in blood infection. Moreover, he saw that the infection was caused by the doctors’ inadequate manual hygiene when they examined women after having performed an autopsy. His great achievement was not only recognising the infection but understanding that the infectious material was on the hands of the dissector, and all that was needed for it to enter the bloodstream was a wound, which can be found on all women giving birth. He was the first to realise that infection caused puerperal fever and this infection was transmitted by doctors. So he proposed and then insisted that the doctors under him washed their hands with a solution of chlorinated lime before examining patients, and as a result puerperal fever all but disappeared. Despite the impressive results at the clinic where mortality fell to a tenth of its previous level, his discovery and measures provoked heated debates and serious conflicts. In 1850 Semmelweis returned to Hungary and took on the position of unpaid head physician at the Saint Roch Hospital in Pest, where due to his endeavours the mortality rate of mothers from childbed fever dropped from between 25 and 30% to under 1%. In 1855 he became the professor of obstetrics at the university in Pest. Due to his declining mental health, he was placed in an insane asylum in Vienna in the summer of 1865, where he died soon after in unclear circumstances. His autopsy records were published in 1977. His teaching was forgotten and it was only after the emergence of Louis Pasteur and Joseph Lister that it was realised that Semmelweis had advocated and practised the principles of sterilisation beforehand. His achievements were only recognised by posterity, the Budapest University of Medicine adopting the name of its former professor, Ignác Semmelweis, in 1969. A collection of printed materials on his discoveries on puerperal fever published between 1847 and 1861 was entered in UNESCO’s Memory of the World register in 2013. Sources: Semmelweis Memorial Committee; www.baratikor.semmelweis.hu; www.mult-kor.hu; www.semmelweis.hu; www.wikipedia.org