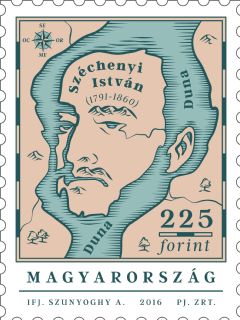 Magyar Posta is celebrating the 225th anniversary of the birth of István Széchenyi by issuing a commemorative stamp. The unique design outlines the portrait of Count István Széchenyi, the initiator of the Age of Reform in the 1820s, an outstanding writer and statesman, who bears the epithet “the greatest Hungarian”. Three hundred thousand copies of the stamp with a face value of HUF 225 designed by the graphic artist András Szunyoghy Jr. were produced by the banknote printing company Pénzjegynyomda Zrt. The new issue will be available while stocks last at first day post offices and Filaposta in Hungary from 8 April, but may also be purchased from Magyar Posta’s online store. Born in Vienna on 21 September 1791, he was the son of Count Ferenc Széchenyi and Julianna, daughter of Count György Festetics. István Széchenyi was already a serving soldier by the age of 17. He fought in the wars against Napoleon, and distinguished himself through his bravery and daring. He travelled extensively in Turkey, and eastern and western Europe. His journeys made him aware of Hungary’s backwardness. He realised that his historic name also imposed a serious duty on him, and thus he devoted his life to the improvement of the nation. On his return home he was the initiator and prime mover of the spirit of reform. Countless developments, innovations and new departures are linked with Széchenyi. These include the foundation of the Hungarian Academy of Sciences, promoting steam shipping on the rivers Danube and Tisza, the building of the Chain Bridge over the Danube, supporting the construction of a railway network and the idea of unifying Buda and Pest in one city, and introducing horse racing to Hungary. He accepted the portfolio as minister of public works and transport in the Batthyány government formed in April 1848. Through his ideas, activities and influence, he was one of the creators of a new, modern Hungary. He is one of the most outstanding and important Hungarian statesmen, whose name is associated with reforms in the Hungarian economy, transport, foreign policy and sport. Source: szechenyiemlekbizottsag.hu