Leonard Bernstein was born 100 years ago 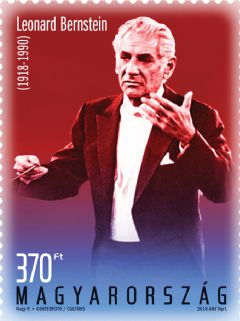 Magyar Posta is commemorating the centenary of the birth of Leonard Bernstein by issuing a special stamp. Two hundred thousand copies of the stamp designed by the graphic artist Péter Nagy were produced by ANY Security Printing Company. The new issue will go on sale from 2 March 2018 and from that date will be available at first day post offices and Filaposta in Hungary but may also be ordered from Magyar Posta’s online store. Leonard Bernstein (1918-1990), the internationally acclaimed American composer and pianist, was one of the most prominent conductors and musical personalities of the 20th century, the first to promote classical music on television. Born into a Jewish family which had immigrated from the Ukraine, he was about ten years old when he started playing the piano. His musical talent was evident throughout his studies. At Harvard University Bernstein studied philosophy and philology alongside music. After graduating in 1939, he enrolled at the Curtis Institute of Music in Philadelphia. There he studied conducting under the Hungarian-born Fritz Reiner, who, it is said, gave Bernstein the only top grade he ever awarded. He made his début as a conductor in 1943, stepping in at very short notice. The 25-year-old, then unknown, Bernstein replaced Bruno Walter, who had been taken ill, to conduct the New York Philharmonic Orchestra, and the performance in the Carnegie Hall was received rapturously. He instantly became popular throughout America and the major orchestras vied for him to appear as a guest conductor. His enthusiasm, his empathic conducting and the pleasure of music he exuded captured even audiences who were not music experts. In 1957 he became the first American to hold the post of artistic director of the New York Philharmonic Orchestra. Bernstein worked with the orchestra, whose musicians honoured him with the title Laureate Conductor, for twelve years. As a composer, he premiered his Jeremiah Symphony with a Biblical theme in 1944, and his first musical On the Town ran for 463 performances and was made into a film. West Side Story, staged in 1957, was a runaway success and the film of the same name won 10 Academy Awards. Bernstein’s modern, mildly jazz-influenced classical works fusing elements of country songs, Mexican dances and Jewish music were also popular. He also brought something new in raising awareness of music. He was able to communicate the essence of music to every age group in an understandable way. He was the first conductor to present a television series on classical music, which began in 1954. His lectures were accompanied by the New York Philharmonic Orchestra, while he also played the piano. The text of his lectures was published as a book entitled The Joy of Music, which was translated into many languages including Hungarian in 1976. He won many awards and honours during his career. The stamp depicts Leonard Bernstein conducting, and the first day cover likewise shows him wielding the baton together with a depiction of a four-beat pattern, while the special postmark is of conducting hands. Sources: www.fidelio.hu; www.irodalmiradio.hu; www.zene.hu; www.wikipedia.org