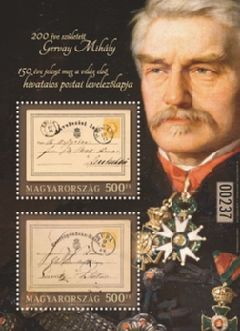 Magyar Posta marks the bicentenary of the birth of Mihály Gervay, the first postmaster general of the Hungarian postal service which became independent in 1867, as well as the 150th anniversary of the first postcard being issued by releasing a commemorative souvenir sheet. Fifty thousand copies of the souvenir sheet designed by the graphic artist Attila André Elekes were produced by ANY Security Printing Company. The new issue is available from Filaposta, philately specialist services, certain post offices and www.posta.hu. Mihály Gervay was born on 15 December 1819 in Pozsony (today Bratislava, Slovakia). Under his management, the postal network was reorganised and staff numbers were increased considerably. Hungarian became the official language of the postal administration and the main post office building was constructed. Furthermore, the first Hungarian stamp series was released. Gervay played a major role in the introduction of the postcard, which was the first issued in the world, on 1 October 1869. The separate Austrian and Hungarian versions had lower tariffs than letters at the time. On the first day alone 10,000 copies were sold. There is an oil painting of Gervay by György Vastagh Senior made in 1878 on the frame of the souvenir sheet, while the two stamps show the two versions of the postcard in Hungarian and German. The special postmark features Mihály Gervay’s signature.