Miklós Jancsó was born 100 years ago 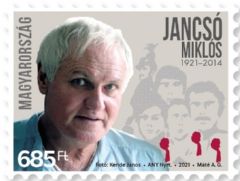 To mark the occasion of the centenary of the birth of the film director Miklós Jancsó, Magyar Posta is issuing a commemorative stamp. Fifty thousand copies of the special stamp designed by the graphic artist András Gábor Máté were produced by ANY Security Printing Company. The new issue can be purchased from Filaposta, philately specialist services, certain post offices and www.posta.hu. Miklós Jancsó (Vác, 27 September 1921 - Budapest, 31 January 2014) was one of Hungary’s most outstanding and highly influential film directors and screenwriters. A winner of the Kossuth Prize on two occasions, he was an Artist of Merit and Artist of Excellence, and won the Prima Primissima and Balázs Béla Prizes among other awards. He taught at Harvard from 1990 to 1992. His name is associated with films such as The Round-Up, The Confrontation, Blue Danube Waltz and Electra, My Love. His works won awards in Venice and Cannes. Shots lasting even several minutes without cutting and with constant movement and change characterise his films. Frequent themes are power, oppression and vulnerability. A portrait of Miklós Jancsó is shown on the stamp, while the background design is a reference to a scene in his film Red Psalm. Another portrait typical of Jancsó appears on the first day cover, while the director’s signature is featured in the postmark.