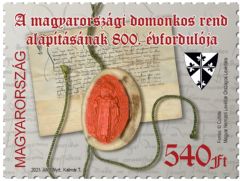 Magyar Posta commemorates the 800th anniversary of the founding of the Dominican order in Hungary by issuing a special stamp. Fifty thousand copies of the stamp designed by the graphic artist Tímea Kalmár were produced by ANY Biztonsági Nyomda. The new issue is available from Filaposta, philately specialist services, certain post offices and www.posta.hu. The Dominican order was founded by the Castilian-born Saint Dominic (Domingo de Guzmán) at the beginning of the 13th century. The members of the order devoted their lives to preaching the gospel, to the intensive learning that made it possible, and to the conversion of heretics and pagans, and gave up all secure income. The Dominican order settled in Hungary 800 years ago, and the order was established by Pál Boldog Magyar in 1221. During the Middle Ages, it was one of the most significant religious orders in the country. Saint Margaret, the daughter of King Béla IV of Hungary, was a member of the female branch of the order and lived in the monastery on the Island of Rabbits (Margaret Island). The stamp shows a certificate issued in 1485 by the head of province of the Hungarian Dominican order, on which the seal of the province depicts a Dominican monk, presumably Saint Dominic, as a preacher. The stamp features the coat of arms of the order, which also appears on the postmark. The envelope contains the anniversary logo of the Hungarian Dominicans.