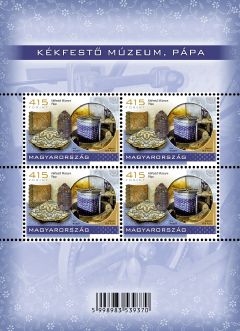 Magyar Posta is continuing its special stamp series presenting the collections of museums in Hungary. The current stamps present a selection from the interesting and impressive treasures of the Jósa András Museum in Nyíregyháza and the Blue-Dyeing Museum in Pápa. The stamps appear in the format of a miniature sheet of four stamps. The new issues were designed by the graphic artist Barnabás Baticz and printed by the banknote printing company Pénzjegynyomda. The new miniature sheets will be available at first day post offices and Filaposta in Hungary from 1 June 2018, and may also be ordered from Magyar Posta’s online store. Visiting museums is a special experience. The exhibited artworks, archaeological finds and artefacts show the wealth and diversity of our museums, the beautiful, fascinating and marvellous things that are there to be discovered. All museum objects were once part of our ancestors’ lives, and our present has grown out of such things, thus they deserve our attention. Jósa András Museum, Nyíregyháza • This municipal museum serving the county was established on 1 December 1868 and is today Eastern Hungary’s oldest public educational and scientific institution. The institution boasts an archaeological collection of European repute and nationally recognised material from the age of the settlement of the Carpathian Basin by the Magyar tribes, while its bronze treasures are of international importance. The museum’s ethnographic, local history, fine and applied arts, numismatics and literary history collections and its historical archives are no less valuable. Its partner institutions are the Sóstó Museum Village and the Kállay Collection. The stamp depicts a portrait of the founder of the museum and one-time chief medical officer, András Jósa (1834–1918), by the painter János Zahoray, the museum’s facade, the bronze equestrian statue erected in honour of hussars called The Hungarian Hussar as well as one of the museum’s most beautiful treasures, a metal ornament for a kaftan excavated in the village of Rakamaz dating from the period of the Magyar settlement. The first day cover is illustrated by the portrait of András Jósa, the museum’s facade as well as the kaftan ornament. The last of these also served as the basis of the design for the special postmark. Blue-Dyeing Museum, Pápa • The founder of the museum was Carl Friedrich Kluge, who came from Sorau in Saxony (today Zary, Poland) and settled in Pápa in 1783. The workshop grew in the 19th century turning into a factory-scale blue-dyeing works. The buildings comprising the industrial monument, the only one of its kind in Central Europe, became a museum in 1962. Its machines driven by hand power and steam are still in working order today. Touring the buildings, visitors gain a detailed insight into the work processes and technological history of blue-dyeing, which is further enhanced by an exhibition of the life’s work of the applied artist Irén Bódy in the loft, originally used for drying. The museum continually arranges temporary exhibitions on ethnographic or industrial history topics, craftsmen and different textiles, and also offers educational activities. The design of the stamp shows a detail of the “Küpa Room” with dyeing tubs and hand-cut wood blocks, including one with the arms of the Kluge family. The background depicts textile patterns. The first day cover features a picture of the Küpa Room, a book of samples, a wood block, the museum’s facade as well as the portraits of Ferenc Kluge (1827-1871) and Károly Kluge (1853-1919). The special postmark also employs the pattern of a wood block.